What are the major types of climates in the world?

Mar 02 2021 - Views: 165
Share
Rate: 4.9 - 50Votes
Table of contents
Do you know how many types of climate are there on the planet? What are they and their primary characteristics? Are types of climate the same as types of weather? If these are what you are curious about, then today’s article “What are the major types of climates in the world?” is something that you never want to pass up. Check it out now! 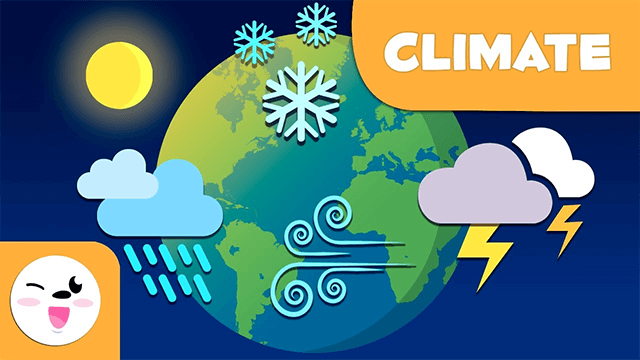 Climate and weather are not the same things

For sure, climate and weather are not the same things. Weather can change from hour-to-hour, day-to-day, week-to-week, month-to-month, or even year-to-year, whereas climate is not like that for sure. That’s why it’s necessary to forecast whether hourly, daily, and weekly. It refers to what the weather is like in a location over a long time.

To identify a location’s climate, as a general rule, scientists need to look at the average weather conditions there for at least 30 years. Of course, different parts of the planet have different climates. According to the Koppen Climate Classification System, there are five primary types of climates on Earth. Let’s see what they are right now!

Types of climates in the world: Tropical climates

Tropical, or also referred to as Megathermal, climates are characterized by constant warm temperatures. A tropical climate zone usually has average temperatures of 64 degrees Fahrenheit (18 degrees Celsius) and above all year round. It also receives 59 inches (1500 millimeters) of rainfall annually, on average. 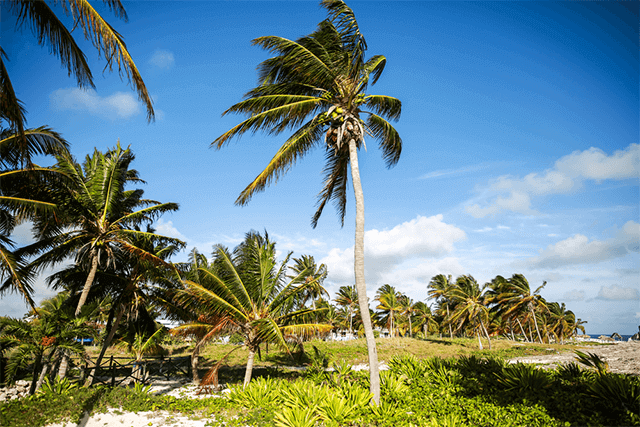 Types of climates in the world: Tropical climates are characterized by constant warm temperatures

Areas that have tropical climates

Well, the tropical climate zone can be found in areas around the Equator, southern portions of Asia, parts of Australia, parts of South America, the Pacific Ocean islands, and more. The countries that are well-known for their tropical climates are Brazil, Malaysia, Indonesia, Cameroon, the Republic of Congo, Equatorial Guinea, Gabon, etc.

We can find a wide variety of tropical rainforests, savannas, as well as chaparrals in this climate zone.

Tropical wet climate is hot and muggy year-round, whereas the tropical wet and dry climate features wet summers and dry winters. About tropical monsoon climate, this one is characterized by three main seasons of the cool dry season, hot dry season, and rainy season with uneven precipitation throughout the year. 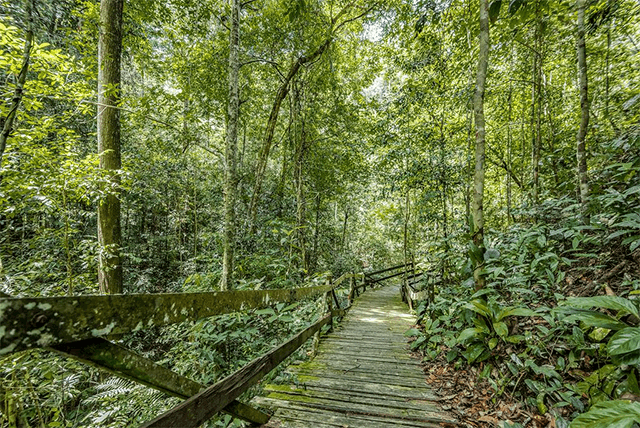 Kuala Lumpur, Malaysia, and Belem, Brazil, are two good examples of places having a tropical rainforest climate, whereas Conakry, Guinea, and Chittagong, Bangladesh, are areas with a tropical monsoon climate. Well, the tropical wet and dry climates can be found in Mumbai, India, Jakarta, Indonesia, or Rio de Janeiro, Brazil, …

That’s all about tropical climates, one of the major types of climates in the world. Next, we will learn about dry climates. 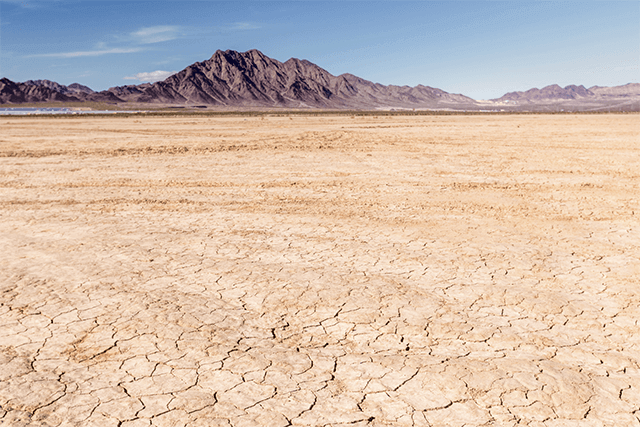 There is very little humidity in dry climates

Areas that have dry climates

Do you know that 32.2 percent of the land on Earth is covered in dry climates? If a place has dry climates, it’s usually a desert! We can find this climate zone in Northern Mexico, central Australia, and in many other places.

Another one of the primary types of climates in the world is the temperate or mesothermal climates. Well, the term “temperate climates” is used to describe the typical weather conditions in areas with mild winters and warm, humid summers. 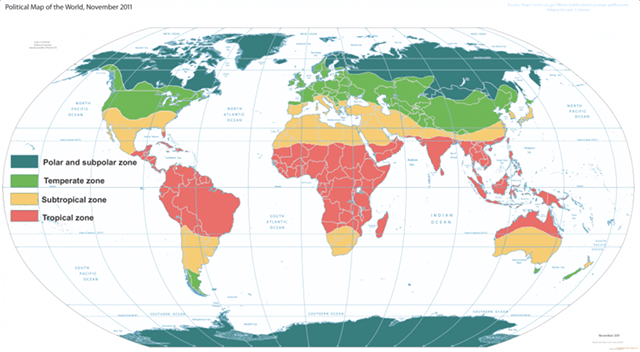 Areas that have temperate climates

The temperate climate zones can be found in the northern parts of Europe, North America, and Asia as well. Common biomes that temperate climates have include deciduous forests and grasslands.

The Mediterranean climates have warm to hot, dry summers and rainy, mild winters, occurring on the west side of continents between 30 degrees and 45 degrees latitude.

Humid subtropical climates feature warm to hot summers, and cool winters with sometimes snowfall. These climate zones lie on the southeast side of continents between 25 degrees and 40 degrees latitude.

About marine climates, they are characterized by warm summers and cool to mild winters with moderate rainfall occurring throughout the year. Marine climates are just found on the western sides of continents where the prevailing winds blow from the sea to land.

The next one of five main types of climates in the world is the continental or microthermal climates which feature warm summers, and frigid winters. People living in these climate zones can experience snowstorms and very low temperatures of less than -22 degrees Fahrenheit (-30 degrees Celsius) in the winter months. 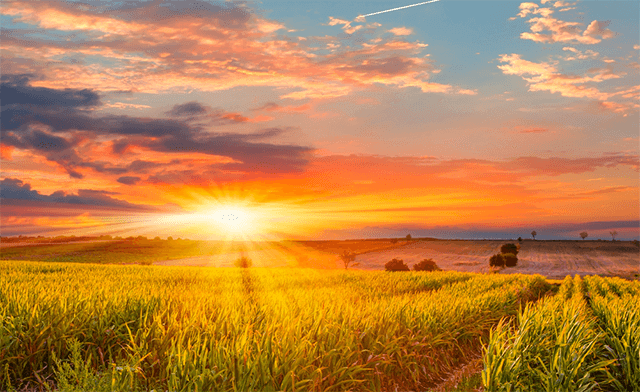 Areas that have continental climates

The regions with continental climates tend to be found in the central regions of landmasses, or on their east coast, north of 40 degrees North latitude.

The last one of the major types of climates in the world is polar climates, which lack a true summer. The temperatures in these climate zones never rise above 50 degrees Fahrenheit (10 degrees Celsius).

Tundra and massive blocks of permanent ice are what make the regions with polar climates so distinctive. 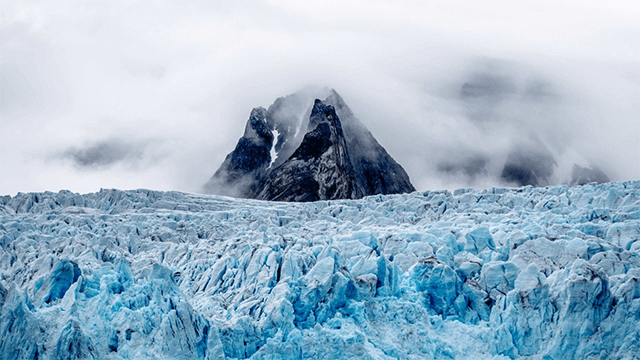 There are 2 subtypes of polar climates, including tundra climates and ice cap climates

Areas that have polar climates

As its name would indicate, these climate zones just can be found near both poles of the planet. Well, according to Blue Planet Biomes, the areas with pole climates usually have only 4 months of temperatures above freezing point.

There are 2 subtypes of polar climates, including tundra climates and ice cap climates. To tell the truth, ice cap climates are the coldest on Earth. Even in summers, temperatures rarely rise over the freezing point.

About tundra climates, well, they are dry, with a short, chilly summer and, of course, a bitterly cold winter. The continuous permafrost lies under lots of the treeless tundra regions.

These are the five primary types of climates on Earth and their subtypes. As you can see, each one of them has unique characteristics that differentiate them from the other. Knowing about those things is so interesting, right? And that’s it for today’s article “What are the major types of climates in the world?”, we hope you enjoyed it.