A "never before seen" yellow penguin sighted in South Atlantic

Mar 02 2021 - Views: 378
Share
Rate: 4.2 - 50Votes
Table of contents
A rare yellow-and-white penguin has been spotted by a wildlife photographer for what it believed to be the first time ever. Here are the details!

The pictures of a penguin with no black but yellow instead on its coat captured by a landscape and wildlife photographer from Belgium have surprised a lot of people. The photographer, Yves Adam, believes that this is a "never before seen" yellow penguin.

At the time, Adams and his team were in a two-month photography expedition through South Atlantic and had stopped on a beach of South Georgia. While unpacking safety equipment, Adams saw a colony of penguins swimming toward the shore, and right away he noticed an unusual individual with a yellow coat. 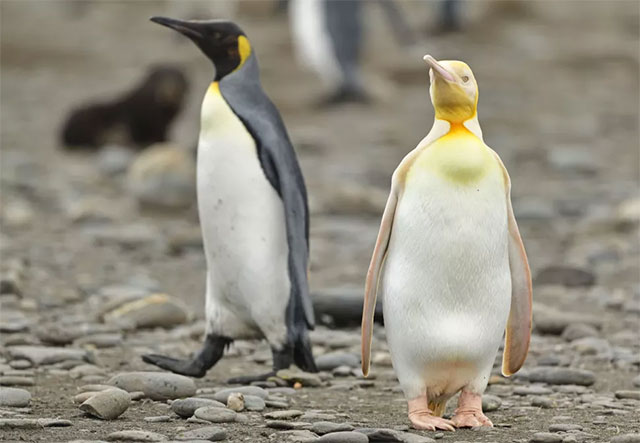 The yellow penguin and a “normal” king penguin spotted in the South Atlantic (Image Credit: Kennedy News and Media/Yves Adams)

"I’d never seen or heard of a yellow penguin before," the photographer told Kennedy News. Adams also said that there were 120,000 penguins on that beach with the only yellow one there.

What makes the penguin’s plumage so strange?

As per the Australian Antarctic Program (via LiveScience.com), penguins having unusual plumage are relatively rare, and sometimes the cause behind the rare plumage color can be hard to identify just by looking at the penguins.

Some unusual coloring in the bird's plumage can be due to disease, injury, or even diet, but many instances are, in fact, due to mutations in the genes of the bird. Such mutations can cause "melanistic" penguins with the typically white parts are black or "albinistic" penguins that have no melanin and thus are white.

Adams told Kennedy News and Media that this yellow penguin has a genetic condition called "leucism" in which its cells do not create melanin anymore, making its black feathers become a creamy or yellow color.

Scientists suspect the sighting indicates the exploration of a new feather pigment class, according to The Independent.

In 2012, a “white” penguin also was spotted in Antarctica. And its condition was supposed to relate to a genetic mutation that dilutes pigment in the feathers of the penguins.

See also: What lives at the South Pole?