Arctic facts: What kind of animals live in the North Pole region?

Situated in the northernmost point on Earth, the weather in the Arctic is unusually cold all year round, especially during the winter. Do you think animal life exists there? Well, not only does animal life exist there, but it’s more than abundant. Check out this post “Arctic facts: What kind of animals live in the North Pole region?” to know more now. 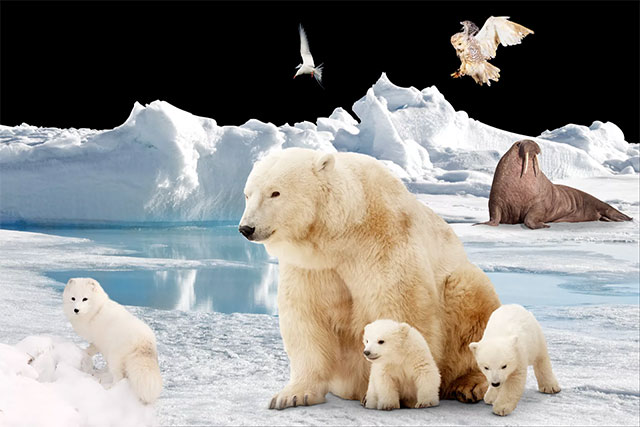 Not only does animal life exist in the North Pole region, but it’s more than abundant

In a previous article, we learned about what plants grow in the North Pole. Despite the harsh weather, there is a wide range of plants found in the northernmost regions of the world. Similar to plant life, yep, the Arctic area also sees a diverse animal life.

While the South Pole is well known for penguins, the North Pole also has its iconic polar bears, right? And besides polar bears, the Earth’s northernmost point area is home to many other unique animals. Following are some of the typical animals living in the North Pole region, let’s see what they are now.

What kind of animals live in the North Pole region: Mammals

The Arctic is known as the coldest place inhabited by various land mammals like bears, foxes, hare, and more. They all have thick fur that insulates their bodies by trapping air. Also, the Arctic is home to different marine mammals. 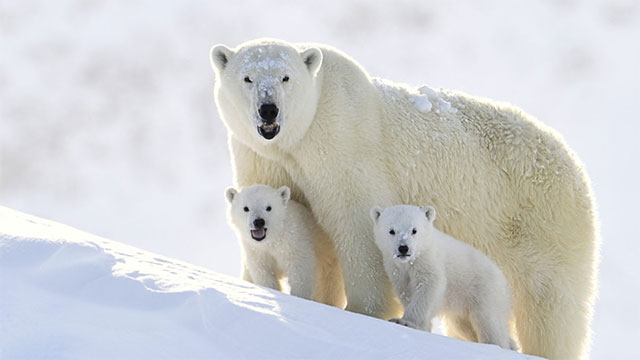 When thinking of Arctic animals, well, the polar bear must be the first species to come to mind, right? Though polar bears are born on land, they are so good at swimming.

The polar bear is also the largest bear in existence. Do you know that the largest polar bears are ten-feet tall when standing on their hind legs? This animal loves a feast too as it spends around half of its time in search of food. 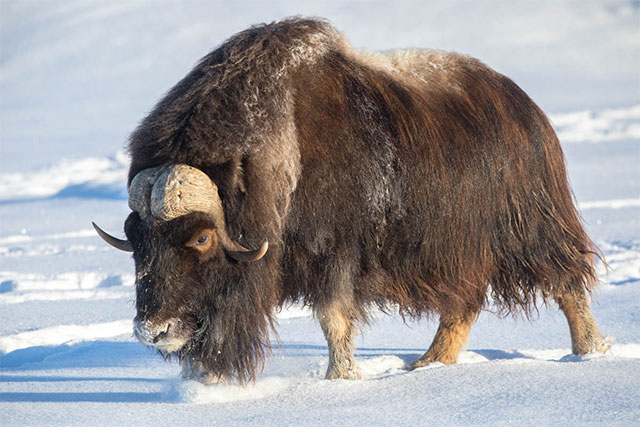 What kind of animals live in the North Pole: Muskox

Thanks to the inner and outer fur coat, muskoxen can endure the harshly cold weather conditions. Their thick fur is even considered the warmest in the world as it has better thermal insulation than sheep’s wool.

Living in herds and grazing on roots, lichen, and mosses, but muskoxen are also gigantic. They might weigh up to 800 pounds (363 kilograms).

Muskoxen hunt for food using their sharp hooves that can dig deeply into the snows to reach the hidden plants below. 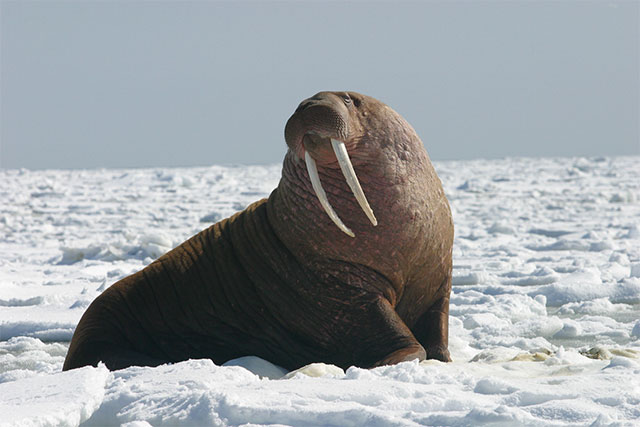 Walrus and its iconic ivory tusks

Walrus is also a true giant when it comes to what kind of animals live in the North Pole and Arctic. Walruses’ weights can reach up to 3750 pounds (1700 kilograms). They are not only true heavyweights but also full of surprises.

Their iconic ivory tusks that you have probably heard about can grow to a length of about 3 feet (1 meter).

Walruses can slow their heart rate and redirect their blood away from certain organs, enabling them to stay underwater longer. They are also excellent swimmers, able to reach speeds of up to 22 miles per hour (35 kilometers per hour) underwater.

Other mammals inhabiting the Arctic, what are they? Along with polar bears, walruses, and muskoxen, the North Pole region is also home to Arctic wolves, bearded seals, Svalbard reindeer, Arctic foxes, Arctic hares, and more. A lot of them can be found in Greenland and other areas of the Arctic.

What kind of animals live in the North Pole and Arctic besides mammals? It’s the bird. A wide variety of seabirds and a great volume of them can be found in the northernmost point region on Earth. 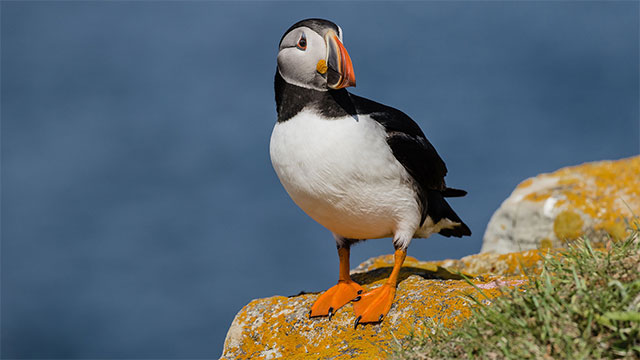 The adorable look of puffin

Puffin is one of the cutest Arctic birds due to its adorable look. The petite puffin spends 2/3 of the year (about 8 months) at sea. They also love to hang out on islands and cliffs in enormous groups.

Before taking flight, the birds love to have a clumsy run across the water surface. To find food, they dive straight into the seawater just like small, torpedoing adventures.

Interestingly, the color of their beaks changes seasonally. In winter, their beaks are in a little bit more gray color instead of bright red. 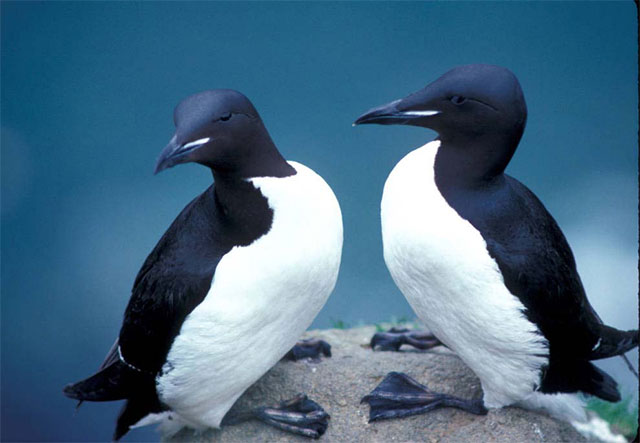 What kind of animals live in the North Pole: Thick-billed murre

Often known as penguins of the North, Brunnich Guillemots or thick-billed murres have white bellies and blackheads and backs. This Arctic bird is famous for its superb underwater diving abilities.

Thick-billed murres can dive to depths of >330 feet (91 meters) or twice that, making them the deepest dive among all types of birds. The birds have stubby wings which might not be perfect for flying but ideal for diving underwater. Unlike many other birds, thick-billed murres don’t build nests. They lay eggs on rocky clips and protect their eggs with pebbles cemented with feces. 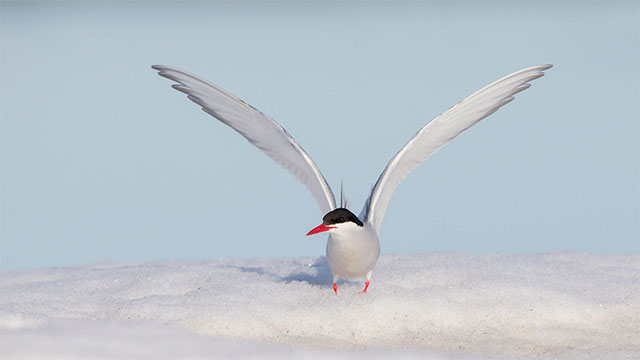 Another bird living in the Arctic is the Arctic tern who can live so long, even up to 30 years. This bird species has very short legs, a red beak, a small round head, together with long angular wings. They feed on small fish species. And Arctic tents dive just below the water surface to hunt for food.

There are still many other kinds of bird species living there, including Purple sandpiper, Barnacle goose, common eider, etc. Among all the species listed above, what kind of animals live in the North Pole region impressing you the most? Let’s move on to learn about one more kind of animal inhabiting there!

Here are the types of whales found in the Arctic. 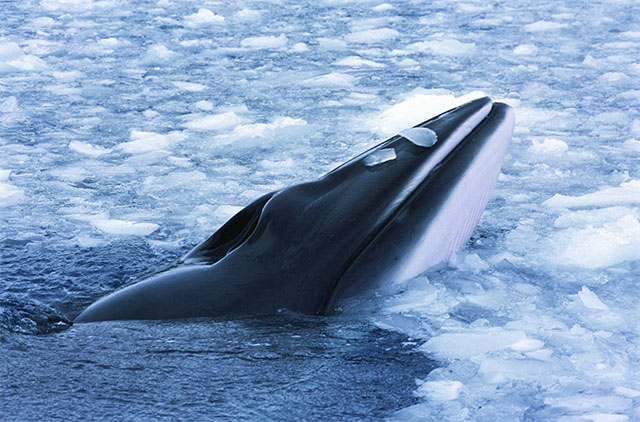 The northern minke whale or common minke whale is the smallest member of the rorqual. The whales can be found living in the waters off eastern Greenland, Barents Island, Kara Sea, and of course, the Arctic Ocean. Minke whales also live in Antarctica. They tend to have a solitary life in Antarctica and Arctic waters. 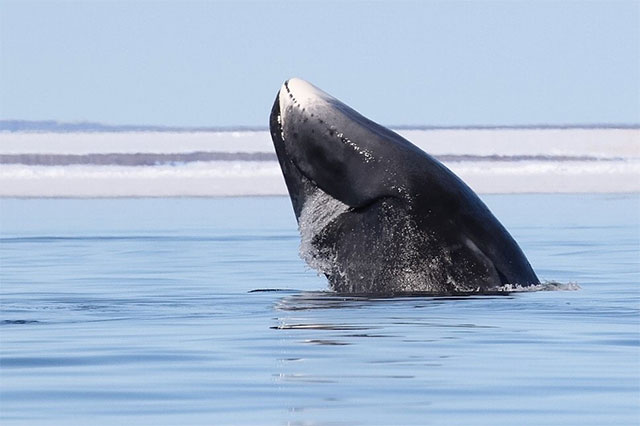 Bowhead whales can live as long as more than 200 years

The Bowhead whale can grow up to 60 feet (18 meters) in length and weigh up to 90,000 kilograms. This whale species has a large triangle skull to break through the Arctic ice to breathe.

Though bowhead whales are slow swimmers, they can leap entirely out of the water. Notably, with a lifespan of more than 200 years, these denizens of Arctic water are the world’s longest-living mammals. What kind of animals live in the North Pole region to know more now? They are 2 other types of whales: Narwhal and Beluga whales. 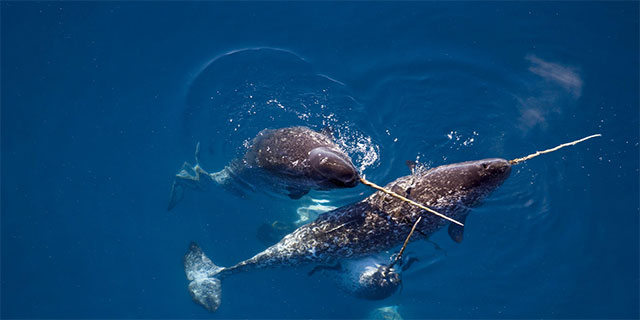 Narwhals and their long “tusks”

The narwhal with its incredibly long tusk, which is actually a protruding tooth, is called the unicorn of the sea. The tusk can grow up to 10 feet (3 meters). Though only males develop this tusk, around 15 percent of females grow this feature, but it’s usually shorter. 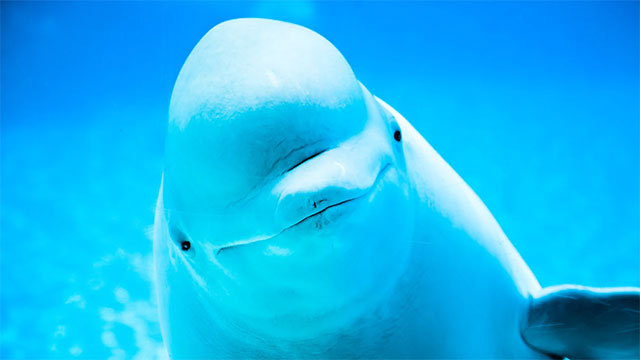 What kind of animals live in the North Pole: Beluga whales

The Beluga whale is one of the most charming denizens of the Arctic waters. They always travel in groups known as pods.

Easily distinguished by their brown-grey to white skin and a sizable round forehead, these beautiful animals are super vocal and so sociable in their pods. Impressively, Beluga whales can mimic the voices of humans with no training.

Recently, we learned about more than 10 popular animals living in the Arctic water and land. Along with them, of course, there are many other animals found there. As you can see, animal life in the northernmost point is so diverse and unique, right? And that’s all for today’s article “Arctic facts: What kind of animals live in the North Pole region?.” Hope you enjoyed it.